Language of the conference german,
simultaneous translation into english

The Austrian Military Journal (ÖMZ), together with the European Military Press Association (EMPA) and the Centre for Leadership and Defence Awareness (CLDA) host the 2019 Vienna Conference on Strategy. The first part, Cognitive-Scientific Foundations of Strategy is organised by the CLDA, the second part „Re-thinking Strategy: Strategy and Will" by the ÖMZ.

The first conference was about finding a first preliminary definition of strategy. The second one tried to define a structure of a future, military scientific core-subject „strategy“. The third one tackled as a first concrete topic „Narratives, Cyber, Hybridity, Resilience, new phenomena, old wine in new skins“ or simply a „mobile army of metaphors“.

In this year’s conference we will discuss the general topic „Strategy and Will“ against the backdrop of the structure that had been worked out and agreed upon previously. Coming from a Clausewitzian understanding of war as a clash of two moments of will which are independent of each other. Thereof derives, to give a few examples, the questions how much „Will“ defines the „intuitive“ level of strategic purpose, if there is a culture-specific emphasis on the factor „luck“ in the process of decision making, if a postmodern development of western societies affects the capacity of the strategic decision-making, if the formula „potential x intention (will) = threat“ still applies when trying to evaluate the security situation in the 21st century, etc..

Attendance at either event is free. Travel costs as well as accommodation will have to be met by participants. The conference language of the Humane-scientific basics of strategic thinking is english, the langue of the Re-thinking Strategy Conference is german all communications will, however, be simultaneously translated into english.

We hope to have piqued your interest in these events and look forward to your participation. 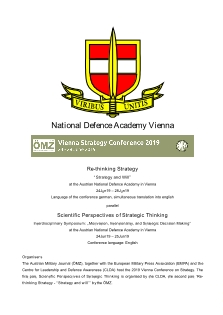