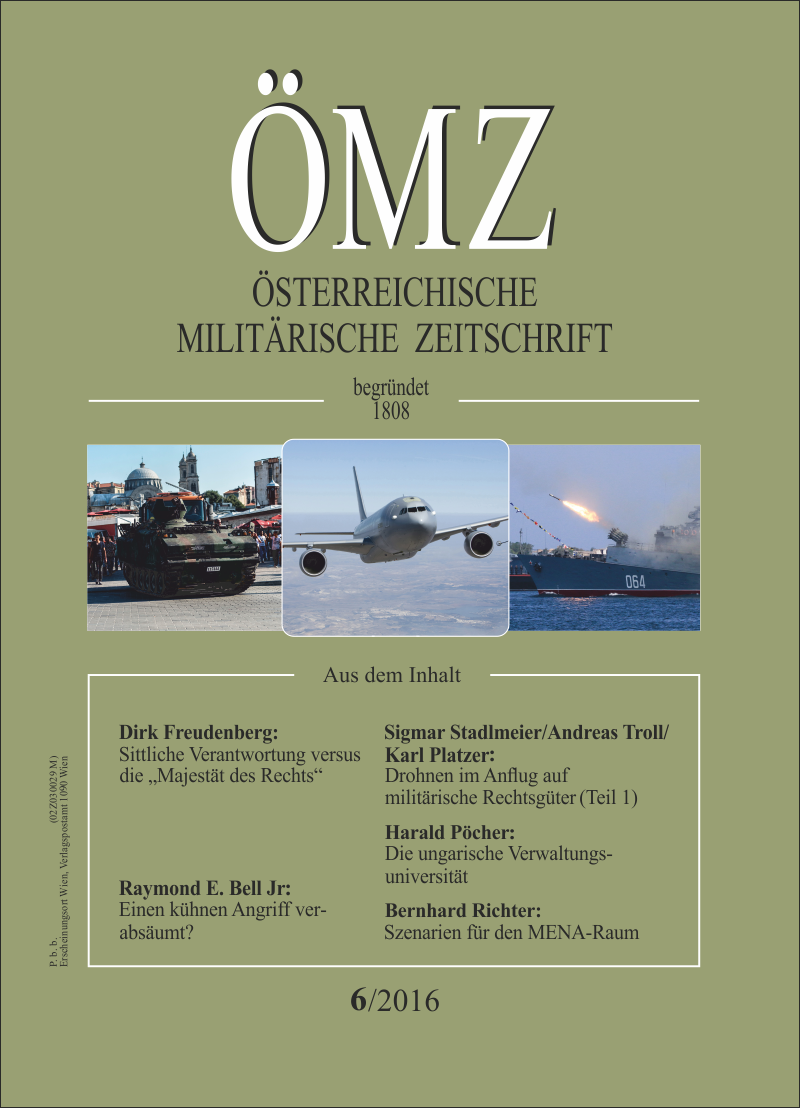 Nowadays matters of conscience and personal motivation are often hardly scrutinized profoundly. According to the present-day prevailing attitude they are not respected in the spirit of the ideology of a political self-righteousness, nor are they tolerated in discussions, because whoever rejects an attitude - no matter for which reasons - supports those who it applies to, thus being on his side. Often a sophisticated contemplation is not carried out at all, neither. Thus, if political self-righteousness deals with the incident, this is reduced to the mere differentiation between “right or wrong”, with the implication of legal and moral “good and bad”. There is no assessment of the inner attitude of the actors. Thus individuals are done wrong in the end. In the centre of the considerations, which are based on the following statements, is the in fact perennial question, to what extent action out of inner conviction has primacy over legal codifications, or has to step back because of the law. One example, which has been used time and again, for acting against obedience towards the government out of inner conviction, is the behaviour of Prussian officers during the campaign against Russia: Prussia’s uprising against Napoleon was initiated by Hans David of York (1759-1830), who had command of the Prussian relief corps, and who was a resolute opponent of the Prussian reformers, but as a Prussian he was nevertheless as eager as them to overthrow the French dominance. Cut off from the French army detachments while withdrawing from the Baltic, without having been authorised by the king, he made a convention on the provisional neutralization of his troops with General Hans-Karl von Diebitsch, who had been advised by Carl von Clausewitz, on 30th December 1812 in the Poscherun Mill near Tauroggen. This arbitrary act developed enormous effective power, triggering the liberation wars byPrussia’s joining the alliance against Napoleon. The uprising of 1813 had begun with York’s - a strict monarchist’s - turning away from authoritative policy. Thus, it can be said that a people revolted against a decision of their rulers who had either surrendered or collaborated.York’s attitude was certainly politically and maybe militarily justified. Concerning the object of the essay at hand, however, only the inner conflict which may have caused the decision for the deed can be considered: to violate the command of soldierly obedience, thus accepting all personal risks resulting from it, against the inner obligation, to induce a military-strategic and at the same time political turning point for the benefit of the state, which was to become decisive fort the fate of Prussia and Europe. In future all those people who have to avert a terrorist attack by airliner will have to face this kind of dodgy and uncertain situation. For this reason, the matter dealt with above, in different constellations, will always be new and relevant time and again. Thus, apparently the individual is left alone when having to stand the test.

Unmanned air vehicles and/or air vehicle systems, which colloquially are also called “drones”, have been increasingly distributed and used in the course of the last years. Here, medial interest, and thus also public perception, primarily has been aimed at “big” plane-like systems such as Predator, Reaper or Global Hawk, which can be remote-controlled from a long distance, carry out longish missions, and can carry substantial military payloads (such as air-to-surface missiles). Apart from these, hardly noticed by the public, the segment of smaller air vehicles for missions in actual view of the operator has increased intensely. Here mainly rotary wing aircraft are involved, which get their uplift and propulsion from a (usually even) number of geminately counterrotating rotors, which are normally propelled by electric motors, which in turn are powered by one or several rechargeable batteries carried along. Flight control is realised solely by software-controlled individual speed regulation of the unadjustable rotors on the basis of control inputs on the remote control, which roughly corresponds to the collective (up/down) and cyclic (left/right/ahead/back) control of a helicopter, although - because of the support by software as well as due to the several rotors - it avoids the mechanical complexity of a helicopter rotor head which has to carry out both control dimensions. Normally, stabilization is integrated in the control software, which makes it possible for all those who have never controlled a model aircraft before, after a short phase of introduction and familiarization, to fly reasonably to some degree. On this basis, serious commercial platforms with payload capabilities (e.g. cameras) could be developed, with quite a broad field of application: Shots of sports and concert and other similar events, getting situational pictures of major loss occurrences from the air without endangering the deployed forces, location of missing or trapped persons by means of thermal cameras, inspection of infrastructure (overground lines, traffic routes), assessment and damage information in agricultural areas and the like can be performed in this way with a fraction of the costs of manned aviation. The „toy“-sector has been booming as well, as has been shown by medial reports especially before Christmas in the last two years, and even such toys, equipped with mini-cameras and storage media, obtainable everywhere ready to fly, are convenient for snoopy glimpses across fences or into military estates. In the course of the last months, Austrian soldiers, females as well as male, time and again have reported drones sighted near barracks. How are such activities to be classified, and how ought and may soldiers on guard duty as well as other persons concerned react?

In this essay the author tries to sound out the legal position around this scenario and to clarify it on the basis of examples. At present, for military institutions the use of drones is an essential means for reconnaissance as well as for warfare. This essay also involves which means military institutions have at their disposal in order to ward off drone attacks and to guarantee military security.

Late summer 1944: Unless these had been a consensus between the Americans and British on the efficacy of a strategy which drove into the rear areas of the German forces in Italy, there could not be an attack over the French Alps into the Po River valley. The existence of a significant physical barrier with limited access through the French Alps and the weather conditions that could reasonably be expected to be encountered during the late summer of 1944 would not have supported a decision to attempt penetrating the mountain chain. Unlike in Hannibal’s and Napoleon’s time, a very long “logistic tail” would have been required. It is indeed possible that the vast resources of the Americans could have been brought to bear to supply Allied troops invading Italy over the mountains, but at what cost, considering the world-wide commitments of the United States at this point in the war? Ultimately, the availability of sufficient troops either American or French for such an operation was not there. The French in August 1944 may have been employed, but Eisenhower wanted as great a force as possible in northwest Europe and the French under his command wanted their main effort to be the complete liberation of France. Certainly the Germans would have been hard pressed to stop a sustained surprise attack over the mountains by a major force. But the American units entering combat through Marseille after the August invasion were not battle tested and there were no large combat experienced American formations on the French/Italian border to ease new units’ transition into battle. Once across the French Alps, Italian partisans would have been welcome support, but it is still questionable how their impact would have affected an Allied effort. The reality, however, is that what Hannibal and Napoleon accomplished in a matter of days, would have been difficult to attain by the Allies even if they could have come to some agreement on a strategy encompassing a trans-Alpine attack in northern Italy. The requisite troops which might have included the U.S. 10th Mountain Division were not available. The start time of August was late if autumn’s approaching inclement weather and closed routes through the Alps were to be avoided by motorized units. The logistics effort to support such an operation would have offered significant challenges. In the final analysis, however, neither American nor British leadership at the highest levels was innovative enough to see the possible advantages of a truly “indirect approach” of risking a bold strike to defeat the Germans in Italy by a major surprise attack over the French Alps. The preferred Allied course of action was to thrust straight ahead. In Italy it was to make a frontal attack up the Apennine Mountains’ spine. In Northwest Europe it was to strike straight ahead on a wide front exploiting fissures in the German defence. When the Siegfried Line was reached it became essentially a matter of slamming directly into the fortifications until a breach was made through which the mobile Allies in operational envelopments could complete the destruction of Nazi Germany. A “bold strike” attempted by the Allies through the Maritime Alps in the mould of Hannibal and Napoleon was a challenge which the Germans never had to deal with.

In the autumn of 2013, a scenario-project for the future development of the MENA-Region (the region fromMoroccotoIran) was realised with the Bureau for Security Policy in charge. This scenario-project was supposed to develop the possible future developments of the MENA-Region, and consequently to analyse deductions and courses of action for the security policy ofAustria. In this essay the relevant steps of the project as well as the results of the analysis are presented. As a seminal-analytical method, the concept of “thinking in scenarios” was chosen. This scenario-project „MENA-region“ was realised in the framework of an interministerially composed project team, where the Bureau for Security Policy of the Federal Ministry of Defence and Sports acted as project manager. The group of experts consisted of the security-relevant departments from BMLVS, BMI, BMeiA and Bundeskanzleramt as well as of external experts and research scientists. In the framework of this task force led by the Bureau for Security Policy of the Federal Ministry of Defence and Sports five scenario workshops took place. In the course of these workshops “influencing factors” and “key factors” as the bases for the scenarios were identified. Thereupon “projections towards future” were developed for these key factors, which were then pooled into consistent scenarios by means of a morphological analysis. On the whole, six possible scenarios for the MENA-Region were developed by the scenario team. A scenario assessment for these scenarios was performed, followed by a consequence analysis in another workshop. The scenarios, however, do not represent strategies or decisions; they are supposed to be tools for decision support and for the development of sustainable strategies. In addition to systemizing processes of decision-finding and to making future-proof decisions, the concept of “thinking in scenarios” - in terms of recognition contiguity - is a major instrument for developing orientation knowledge and establishing a forum for strategic dialogue. From the author’s point of view the objective project has contributed to this aim. In addition to the actual purpose of this project - developing scenarios for the MENA-Region - this project, together with all former scenario-projects in the framework of the national situation picture process, has fostered some kind of “community building” for strategic future analysis on the national level.