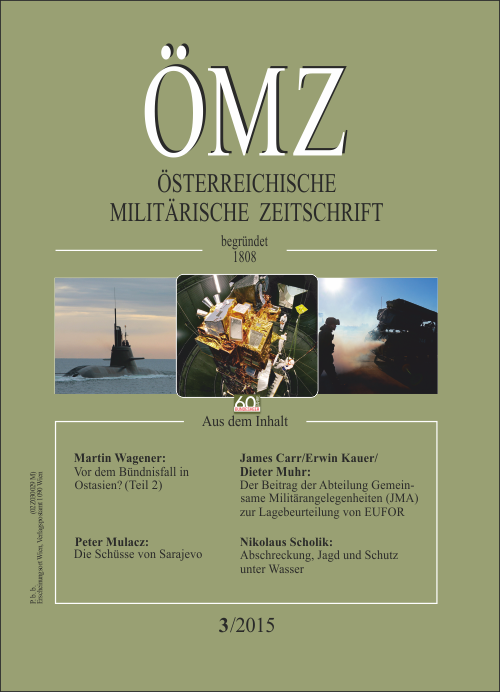 In part 1 (ÖMZ 2/2015) of the essay at hand, the basic information, legal conceptions, motives of action of decision makers, and efficacies of the conflict on the Senkaku-/Diaoyu-Islands were presented. Now, in part 2, the following questions will be answered against this background: Which role do the USA play in the Chinese-Japanese territorial conflict? How likely, given the latest escalation of the situation in the East China Sea, is the proclamation of the American-Japanese case of confederacy, and how could it develop? In addition to that, possible triggers of an escalation of the territorial conflict will be delineated. In the 1990ies, the USA were confronted with a situation in East Asia for the third time within 60 years, in which they were in rivalry with a dominating, competing and aspiring great power. From 1941 until 1945 they were at war with the then Far East hegemony power Japan. During the East-West-Conflict, bipolar structures – the “superpowers” USA and Soviet Union – dominated the security architecture of the Far East. There, China was held the balance several times. When the Cold War had come to an end, the USA were suddenly the only relevant military power on site, among other things also because of the fact that potential rivals had failed. The Soviet Union had perished in 1991. Russia, which had arisen from it, first had to find its way from a security-political point of view, and in 2002 finally decided to give up its last military post in Vietnamese Cam Ranh Bay. China, on the other hand, due to internal turbulences caused by the quelling of the democracy movement on Tiananmen-Place in June 1989, was too weak to be a relevant factor of power in the Far East. After this quite natural confusion of a power political phase of upheaval, a new strategic constellation has developed in East Asia in the past years, where Washington and Peking are in a classic great-power-conflict. While the USA intend to keep their position as hegemony power of the region, China has taken over the role of peer competitor who, in the long term, will try to turn Pax Americana into Pax Sinica. From this perspective, the territorial conflict in the East China Sea gets its special global importance. In East Asia the USA appear both as strategic rival of China and as ally of Japan. China has the notion that Japan behaves so self-confident in the conflict on the Senkaku-/Diaoyu-Islands because it can rely on the support by the USA. If the case of confederacy occurs, the USA will have the choice: plague or pestilence. If the USA abide by their commitments, there will be war against China. If, on the other hand, the USA let Japan down, their time as the regional hegemony power accepted by most states of East Asia will be over. The trustfulness of many American security and alliance partners would be deeply shaken, and this would have unforeseeable consequences for the security architectures in Europe, in the Near East as well as in East Asia.

In view of the latest developments in Bosnia and Herzegovina (BiH) as well as in the light of other developments in the entire region (e.g. Ukraine), the situation in BiH has become a centre of interest both for Europe and for the international commonwealth of states in general. This essay is supposed to serve persons who deal with complex systems on an operational level, looking for methodologies which lead to rational results such as is the case in BiH. The object of this essay is describing how Joint Military Affairs (JMA) functions in the EUFOR Headquarters, and which methodologies are applied in order to fulfil these tasks. The policy or strategy of EUFOR is not subject-matter of this analysis. JMA is assigned to of the EUFOR Headquarters’ Division for Capacity Building and Training (CB&TD). EUFOR operates under a UNO mandate under the General Parameters for a Peace Agreement (GFAP) of 1995. The hypothesis that a comprehensive approach by means of system analysis is the suitable methodology for assessing and perpetuating the situation picture has proven to be true. There is no doubt that EUFOR is part of a complex adaptive system (CAS), and that EUFOR shapes this system and is, on its part, influenced by the system. The use of this approach put JMA into the position to produce situation, threat and risk assessments, which help EUFOR to carry out its operations in a more secure, stabile and effective manner. This approach has allowed JMA to develop a logical verifications strategy based on the analysis of relevant factors applicable to the existing situation. The approach was supposed to consider all relevant factors during the assessment by JMA. EUFOR considers itself to be an actor within the underlying system, and JMA is a vital actor in the answers of EUFOR to fluctuations in the system. To conclude, JMA applies actions and assessments in compliance with the EUFOR mission, at the same time regarding the activities of other actors. JMA-activities have to support the mission activities of EUFOR within the system, and especially EUFOR commander’s intent. The method of how to achieve this aim is a recognized modus operandi in the EUFOR Headquarters. The desired result identified by JMA still is “what JMA needs to know in order not to be taken by surprise”.

As a final result of the two „Balkan Wars“ of 1912 and 1913, the borders on the Balkans had to be re-drawn. Especially the Ottoman Empire had to concede vast regions to its neighbouring countries, whereas Serbia could extend its area by 80%, emerging highly armed and experienced in war, and was able to become the regional power. This further supported Serbian nationalism in Bosnia, which had been fostered in the various “cultural associations” for a long time already. The different secret societies – the most important were „Mlada Bosna“ (Young Bosnia) and “Unification or Death”, mostly called “Black Hand” – despite variable ideological alignments, had one aim in common: to liberate Bosnia and Herzegovina from Habsburg reign. Leader of the „Black Hand“ was Colonel Dragutin T. Dimitrijević, head of the secret service of the Serbian army, who had considerably taken part in the bloody-minded murder of the then Serbian king Aleksandar Obrenović and his queen in 1903. In the national propaganda, Serbian extremism systematically defamed the successor of the archduke as enemy of the Serbs and also publicly invoked his murder, although in reality he had always rejected the pre-emptive war plans of his chief of general staff G.d.I. Franz Conrad von Hötzendorf (Conrad’s idea is madness. A war against Russia will be our end. If we attack Serbia, Russia will support them, and we will be at war with Russia. Are the Emperor of Austria and the Czar of Russia supposed to thrust each other from the throne, thus letting the revolution run its course?”), and had intended to strengthen the South-Slavian element in his plans for a federalist reconstruction of the Monarchy. Thus, the planning and preparation of the assassination of the successor couple took place with the support of Serbian national bodies, i.e. of the army and the secret service, and with the government’s knowledge and approval, as well as with the knowledge of the royalty. The domestic political situation in Serbia was extraordinary. New elections were to come, and the king had just resigned (temporarily) in favour of the crown prince Aleksandar. Nikola Pašić, the founder of the Radical People’s Party and prime minister, politically dependent on the powerful head of the secret service Dimitrijević, from then on was in a dilemma. If he had done nothing and the assassination had been successful, Serbia would have been discredited on international stage. If it had become known that he had known about it, he would have been called to account as confidant. On the other hand, if the assassination had not been successful because of his warning to Austria, he would have been a dead man, at least politically. For this reason he instructed the Serbian emissary in Vienna to drop some hints which might have been interpreted according to the result. In addition, he had the borders closed, but at the time of this tokenism the weapons had already been in Bosnia. This essay describes the serious events until the assassination of Sarajevo on 28th June 1914 of the successor couple of Austria-Hungary, Archduke Franz Ferdinand and his wife Sophie Chotek, Duchess of Hohenberg, on the occasion of their visit in Sarajevo. The shots from the pistol of Gavrilo Princip were, as it were, the first shots of the First World War, which caused three legitimated empires to fall: the Austro-Hungarian Monarchy, the Czar Empire, and the Ottoman Empire; thus the shots actually triggered the “Thirty Years’ War of the 20th century” (1914-1945).

Both of the essays so far published in the series “Maritime power in the 21st century” (ÖMZ 3/2013 and ÖMZ 4/2014) have naturally depicted the submarine component in its respective strategic and tactical-operational role in short. In the strategic, conceptual and operational considerations of states intending to or playing a part in the global power play, high systems such as aircraft carriers, air and weapon systems like fighter planes, UAVs, anti-ship-missiles, cruise missiles, and electronic detection and combat guiding systems are in the focus of interest and of the political and military discourse. If, however, one looks at the present (military) components of strategic deterrence and at the tactical-operational conceptions of maritime mission planning’s, the role of submarines – when assessing the overall picture respectively – will not only become visible more clearly, it even represents an indispensable factor on both levels. In the beginnings of the submarine weapon only one single task was in the focus: destroying enemy ships. Thus it is legitimate from the outset to assign a strategic role to this branch, too. In the First and Second World War the existing maritime imbalance was supposed by the German Reich to be redeemed by a forced submarine war, thus breaking open the sea blockade. With the phase of the Cold War and the great technological innovations in the fields of propulsion, low-noise, diving depth, residence time under water, and weapon-technical system changes (torpedoes, cruise missiles, and intercontinental ballistic missiles), the role of submarines has increased and changed considerably. The former tendency of the classic division into the tasks “deterrence”, “hunting and protection”, which led to respective solutions, now indicates a new view and a redefinition of tasks and respective technical solutions. Multi-mission-submarines will be the future answer for the extended challenges:

The importance of submarines in the entire combat spectrum of maritime operational conceptions as well as the new challenges under water concerning potential and military capabilities on the surface is as great as never before. Nuclear deterrence capacity is an additional factor. On the whole, plausible and effective nuclear deterrence in the power play of the great powers, and maritime power projection as well, is unthinkable without a strong force under water.