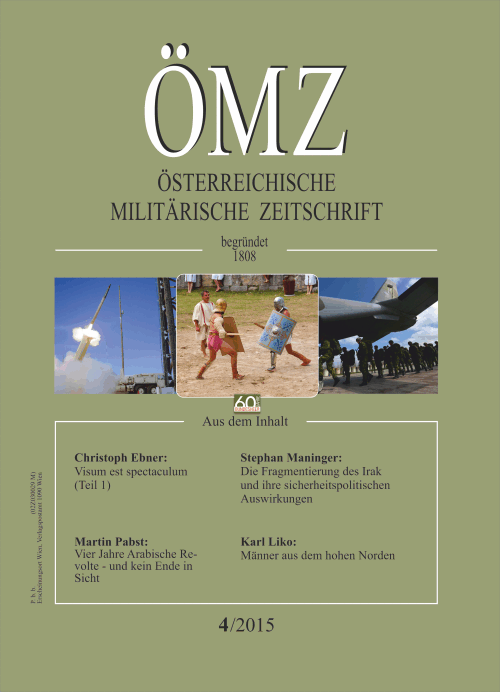 The relationship of the Roman legions with „entertainment industry”, especially the gladiator games, certainly did not jade in the leisure of soldiers and the spatial connection of camps and arena ovals. On the contrary, the throughout variable relationship manifested itself, among other things, in the oath of the gladiator, which oriented itself towards both the oath of the legionnaire and the very variable benefit the generals and emperors drew from the games economy in times of crises. On the other hand, public security was endangered by the games, because of the vast number of men fit for military service in the gladiator schools, who in the course of the Spartacus rebellion demonstrated their threat potential and their destructive power to the public for the first time. Thus, the following considerations are supposed to illustrate the development of gladiatorship and its eventful relationship with the military, as well as its influence on Roman security policy, at least its main features. The first written documented fencing games, organised 264 BC in Rome, resembled death sacrifices, offered in the course of funerals of social elites. According to Tertullian, a Christian apologist living in the transition period from the 2nd to the 3rd century AD, the protagonists fighting at the funeral piles or after the interments were prisoners of war and mali status servi, i.e. slaves with ugly physical appearance. Especially the latter were of no more immediate use in a society finding its living, even wealthiness, in tilling the land. For this reason, they could be “sacrificed” in a fight of life and death by their masters without any economic or humanitarian misgivings. This kind of selecting the fencers lets us suppose that the audience was certainly not spoiled with satisfying martial arts. On the contrary, the bloody sacrifice was contents and aim of the “games”. Until the Imperial Era, however, the special body guards, where again and again gladiators turned up, did not lose their importance completely. Tacitus, for instance, mentioned that provincial governors kept gladiator squads, which they certainly needed for being able to organise games on-site. Although these reports concentrate on the provinces, the tradition that nobles and even emperors in Rome kept body guards consisting of gladiators can be traced until the 4th century AD. An act from 397 AD demonstrates that even in the late ancient world former arena fighters joined the service of senators, which was finally forbidden by Emperor Honorius, both because of reasons concerning public security, and for strengthening the authority of the municipality. Apart from the employment of gladiators, other parallels and interactions of both spheres deserve more precise contemplation as well.

The origin of the so-called „Caliph State” 2014 as a result of the Iraq Conflict which had started in 2003, has not only abolished state frontiers in the Near East, but has also effects on the security political situation in Europe. The liberation and democratization of Iraq as a model for the entire Near East has proved impracticable. Moreover, this part of the US-strategic nucleus seems to have contributed to a destabilization of the region. The global withdrawal of the USA, prefaced with a speech 2009 at the University of Cairo by the US-President Barack Obama which was supposed to be peaceable, has given rise to a global security vacuum. This has enabled the Jihad forces not only to recover from the heavy setbacks of the last century, but also to achieve a geographical basis in 2014, which is called “Caliph State”, consisting of the Sunni parts of Iraq and Syria. History of origins, consequences and action alternatives are objects of the following essay. There is the strategic interest of the West to destroy the Caliph State forever and to replace it by an order doing justice to the right of self-determination of the Sunnites in their regions. Here it does not matter whether such an order is democratic or not. The American allies in the region have lost their confidence in the action willingness of the USA, and they will certainly find other ways of protecting their interests. Regional rivals such as Saudi-Arabia, Egypt, Iran and Turkey will position themselves in this sense, and they will use the abolishment of the Iraqi borders as an opportunity to strengthen their influence. The acquisition of technologies of mass extermination for the protection against an enhanced Iranian influence will become more likely for actors such as Saudi-Arabia. The Western intervention in Iraq will have to deal with a territorial solution, as neither the USA nor their allies nor the international community have the power and the resources to re-join a fragmented Iraq. Drawing natural borders appears to be more promising than another “nation building” – attempt after a third intervention of the USA. The war in Iraq has become a source of regional and global instability, and has induced a rearrangement of borders and power proportions in the Near East. The experiences made there again demonstrate the weaknesses of Western approaches of conflict solution, thus necessitating rethinking the intervention strategies, away from the vision of state preservation, towards a territorial solution. At the same time, both the travel freedom of many “home comers” and refugee flows lead to a conflict transfer into Western countries, thus generating serious and permanent security political changes. Here, with a Western World which retreats, becomes senile, and is morally exhausted, the consequences are in the air.

At the turn of the year 2010/2011, in almost all other Arabian states a new protest movement arose, which called for political and economic reforms. Triggered by the self-burning of a victimised young vegetable dealer in a neglected Tunisian provincial town, within only a few weeks the long-time presidents of Tunisia and Egypt had to yield to the pressure of the masses. This rapid success fuelled an atmosphere of changes. Optimists in the West rashly talked about an “Arabian Spring”, prognosticated quick democratization of the region based on the model of Middle-East and East-European states, and announced the end of at least militant Islamism. In the sense of Francis Fukuyama, they considered “the end of the matter” obtained, because only in the Arabian region dictatorial, autocratic and semi-autocratic systems had survived after the breakdown of communism. Pessimists (especially from Russia and Israel), on the other hand, prophesied that radical Islamistic forces would be elected into power due to their rich resources and possibilities for propaganda. After first election successes of Islamistic parties in Tunisia and Egypt, they talked about “Islamistic Winter”. Both sides, however, were wrong. The Arabian protest movement did not lead to an integrative or to a rapid change process. The external analysts had generalised, waiving country-specific political, economic and cultural parameters. More proliferative states such as Algeria and the Golf monarchies so far had hardly been shaken by protests. They had been able to calm down critics with higher wages for officials, subsidies and social contributions. In the kingdoms of Jordan and Morocco, the monarchs succeeded in consolidating their own legitimacy with limited top-down political reforms. Finally, however, the protests in Syria, Libya and Yemen escalated and became armed conflicts: On the one hand, the rulers of these states defended their power by force, and on the other hand, in the opposition groups ready to violence rushed forwards ready to violence, encouraged by external actors. Moreover, the analysts had wantonly underestimated the relative importance of external exertion of influence. For more than two centuries, foreign powers had been competing for power and resources in the geo-strategically important Arabian region. The global and regional powers quickly adapted to the new situation, unless they had actively aimed at changes themselves before 2011 already. With political and financial, sometimes also military exertion of influence they tried to affect the Arabian upheaval, entering varying alliances with internal actors. The debilitation of governmental power as a result of long-time transformation conflicts promoted the rise of actors who operated across the borders. Thus, the Jihad terror militia „Islamic State” (IS), which operates in Syria and Iraq, neglects not only the existing power relations, but also states and borders, and tries to rearrange the Arabian region under its control. This will open Pandora’s box: religious, ethnically, or tribally organised movements, as well as criminal actors, increasingly operate in a transnational manner. The “worst case” would be an interlacing of the persisting Syrian civil war with the Near East Conflict. A first warning symbol for this are skirmishes between Hezbollah and Israel on the Golan in the beginning of 2015.

„Migration background“ was no special problem in the armed forces of old Austria. Foreigners came in swarms and integrated themselves well. They came from France, Italy, and Spain, from Ireland and Scotland, from Switzerland and from the numerous principalities and Duodez-States of the Holy Roman Empire. Many of them severally distinguished themselves; a number of them achieved high positions in the military hierarchy. Prince Eugene, certainly the greatest general in Austria’s history, was one of them. Most of them were Catholics, but several also came from Protestant areas. Only in the high north of Europe the interest in a military career in the Habsburg Empire seems to have been not really great. The distance between the Scandinavian countries and the Danube area was long, though – and not only in a geographical sense. Nevertheless, there were some applicants from the states of Northern Europe who entered Austrian services. After all, seven interesting fates can be presented here. In the beginning, there was a Danish mercenary leader from the Thirty Years War. He was followed by another three Danes, two Swedes, and one single Norwegian. In the following presentation, their order, however, is not determined by their nationality, but by historical sequence of events, which reaches back to the 17th up to the 19th century. The author portrays the political-military careers of the persons in question, who were in the service of Habsburg during the respective eras.