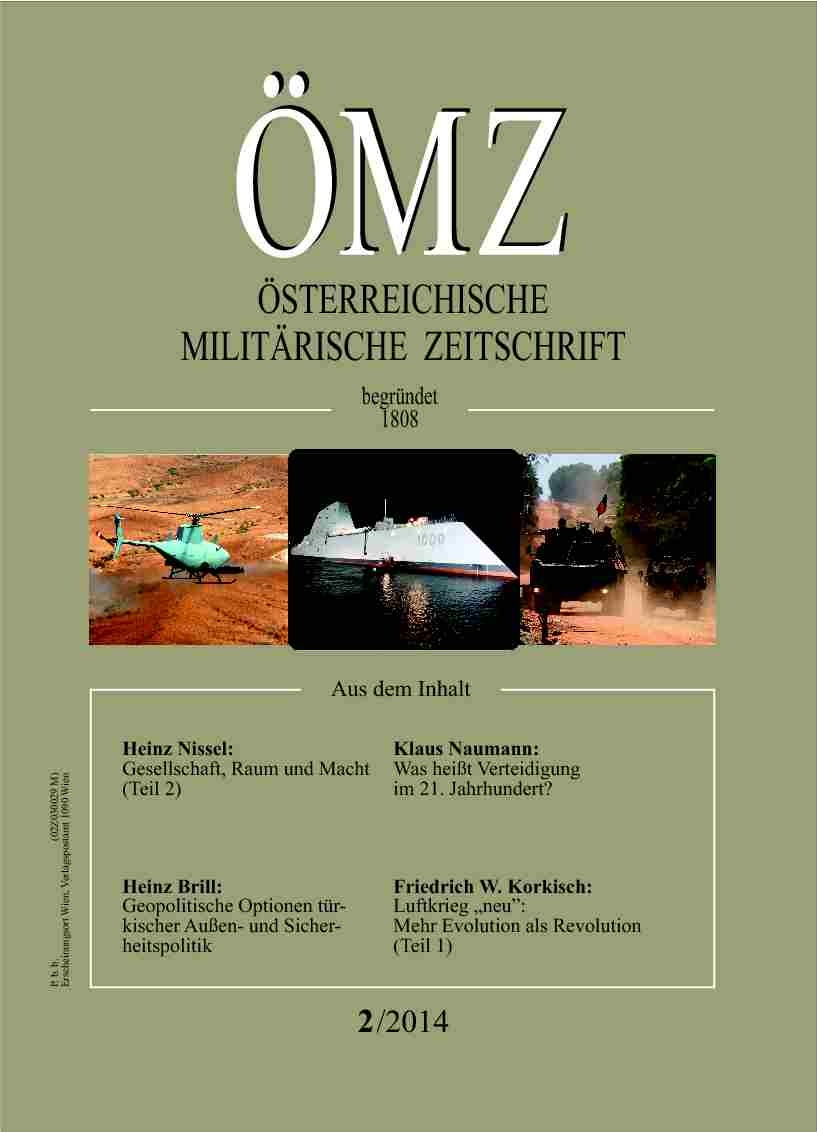 „Geography is what geographers do“. This succinct and nevertheless famous statement by the American geographer A.E. Parkins (1934) can be used as a killer argument in every discussion. It would not, however, help us with settling the definition of the position of Critical Geopolitics. Be that as it may, the crisis of identity of Critical Geopolitics persists, as does the one concerning Geopolitics. Its subject matter, its methods and its contributions to social scientific theories remain controversial. One will never find an unanimous definition. Within the field of human geography, on the other hand, it appears to be clear what Critical Geopolitics means, as opposed to “classical Geopolitics. But the term „Geopolitics“ has a different connotation in related disciplines such as political sciences, in international relations or in mass media. Here, the term “Critical Geopolitics“ seems to be a contradiction and at best is a “wrong” combination of terms. Since Ratzel and Haushofer „Geopolitics“ stands for the use of power by the powerful against the inferiors, and can by definition not be “critical” with regard to the condition of a society or its relations of power. As modern and post-modern macro-theories are incompatible, all attempts at combining some of their partial fields are not successful. What does “critical” actually mean? There are very varied attitudes, and thus the question becomes interesting whether Critical Geopolitics is only a new Geopolitics (in disguise) in the end. Exactly this - strictly speaking - blending of incompatible items has contributed to the popularity of Critical Geopolitics. This is a core problem of the „travelling theories“ in the social sciences. Does the lack of a “great theory” keep Critical Geopolitics from being “ideologized” - exactly for this reason many experts categorically disapprove of creating a theoretical-methodical and binding canon - or will such an attitude not inevitably lead to the destruction of the core competence of the subject (to the deconstruction of geopolitical discourses and role models sooner or later? Other ways appear to be more promising: Leaving the “Western” hegemonies discourse and concentrating on the “rest” of the world, reducing the sticking to the fields of formal and popular Geopolitics for the benefit of practical Geopolitics, creating stronger cross connections with political economy, political ecology, and geo-ecological and geo-economical approaches altogether, and finally focussing on investigations of the media and media analyses. It is certainly conceivable that a critical counter-public will form via Internet, Twitter, Facebook beyond (Critical) Geopolitics, which acts rhetorically powerful and frustrates the intervention plans of policy-makers and their helpers. The orchestration of scaring-campaigns launched by the media (especially television) in order to ensure the acceptance of military operations (Iraq, Afghanistan) has suffered heavy setbacks in recent years. The latest about-face concerning the sanctions against Syria is certainly not rooted in the (not any longer) silent majority of the US-population.

Europe is in peace to a great extent. Wars, which can have states fall victim to aggressions endangering the national existence, have become more or less unlikely. This is the one great achievement for peace of the EU, and it received the Peace Nobel Prize for it. This achievement, however, would hardly have been possible, if American troops had not been present since the end of the Second World War for 68 years now. Their presence gave protection against outside and settled tensions among the states of Europe. Today, the topic of defence does not have any relevance in public discussions any longer. Even the USA have become influenced by this mood and are aware of the fact now that that they are and will be the only law enforcement agency of the world, although they will probably not intervene for the sake of Europe, as they did three times in the past century. Perhaps historians will talk about the Obama Doctrine later on in the 21st century: „Europe to the Europeans“. Naturally, there are many hazards threatening Europe, but they cannot be described directly, they are hard to impart, and seldom of a military nature. Thus, the question is not only relevant in Switzerland: What does defence mean in the 21st century? - Even if the Swiss have just confirmed their compulsory military service quite impressively. Maybe here, however, this question is even more insistent, because it is to be answered on a national level, whereas NATO and EU member states can refer to international assessments and obligations when justifying their defence efforts. Strategically, Germany as well as the NATO will remain aligned for defence. For Germany, this already results from the regulations in Article 26 GG “Ban of war of aggression”. Strategic defensive, however, does never also mean to waive the capability to act offensively on the operational level. This implies establishing armed forces, training and commanding them when deployed, quickly disposable, highly mobile, deployable everywhere, and geared towards a spectrum of tasks reaching from intensive fighting under the conditions of „information warfare“ to humanitarian assistance, capable of sustaining for longer periods of time. For the security forces, armed forces, police, intelligence services and disaster control, this means close cooperation and the capability of taking over all tasks ensuring public order in regions without functioning politic bodies. Today, defence necessitates an integrated system of all security forces as well as command and control which acts swiftly, inter-ministerially, including the entirety of the state, reaching from protection in humanitarian emergencies and natural disasters, the fight against organized, even internationally organized crime, to the repulse of and protection against impacts of NBC-weapons, air attacks and cyber attacks. All European states have to face these tasks, and they have to inspect their national forces and organisations accordingly and, if necessary, improve them.

In the course of assessments of international situations, geopolitical factors and influences are increasing. In the case of Turkey, the special geopolitical importance of the country is stressed in nearly every international discussion. Because of Turkey’s position between geopolitical areas, and due to the altered space-powers-constellation in Eurasia, the Near East and North Africa, “geopolitics” has become a central criterion for “the new assessment of the situation” of Turkish interests. Although in its EU-policy Turkey demonstrates verbal strength from time to time, it is aware of the fact that its options are numerous but substantially limited. The reason for this is the fact that neither the markets in the Near East region and in the Caucasus, in the ECO-states, the International Islamic Conference, the D-8 Group nor the membership application for the “Shanghai-Group” do not offer any serious alternatives for the EU market for the time being. Many of these unions just exist or have failed. On the other hand, the customs union with the EU is one of the few agreements with profits to both sides. As the majority of the EU states prefer Turkey to remain a regional power with ambitions to become a superpower instead of becoming a full member of the EU, Ankara’s search for an alternative centre of gravity outside the EU will remain to be a challenge for Turkey’s politics. But utopism and perfectionism are dangerous. Thus, rational politicians will make Bismarck’s maxim “politics is the art of the possible” the guiding principle of their action. John Forster Dulles refused to take alternatives for the „Cold War“ or the European defence Community into consideration. The British Prime Minister Winston Churchill suggested his ideal solution: “The best plan for achieving flexibility is to have three or four plans for every single chance, which must be finished in detail. Thus, it will be much easier to switch over from one to the other, depending on how things develop.” When applying this solution to Turkey’s current situation, the question is whether and to what extent Churchill’s solution for a sovereign state will work here. Renowned politicians, journalists, scientists etc. believe that there is no alternative for the EU membership of Turkey. Other prominent politicians, journalists, scientists etc., on the other hand, are convinced that one wants to go the road to “full membership” and thus talks oneself into having to do it. It turns out that a possible EU membership of Turkey is prevailing in public discussions, but there certainly are alternatives.

On 21st and 22nd November 2012 the Air Force Symposium 2012 of the Aviation and Air Defence School was carried out under the direction of Brigadier Günter Schiefert. This symposium focussed on aerial war operations. Never before so many books, analyses and essays have been written about political and military chances, potentials, costs and problems of aerial warfare than since Desert Storm 1991. In these works, time and again one can find suggestions concerning changes in command, organisation, tactics and use of arms, but also new terms and definitions, such as third wave-war, counter land operations, hybrid air war, or effects-based operations (EBO), as well as the problems arising from close air support (CAS), or how to have stronger effect in an air campaign. The importance of air power is emphasized, and sentences such as „We control the air, and enable the Army to win“ are typical of this. Terms such as counter air, counter land or deep strike are not new, but new terms alone do not change the principles of aerial warfare much anyway. Some authors, however, (like John Warden) believe that new terms demand new thinking. The air land battle of the 1980ies laid the foundations for an especially close cooperation of land and air forces, and it triggered off about 100 contributions in the Military Review magazine as well as a continuous modifications of the Air Force Basic Doctrine, but was really achieved by it? Although the Air Land Battle 21 was presented as a tactical variation on „shock and awe“, it disappeared again from literature around 2005. On the other hand, the Air-Sea-Concept for a possible war against China is new. In addition, in the Pentagon an Air Sea Battle Office (ASBO) was established in August 2011. Many justifications and suggestions concerning new theories always refer to historical examples. Every new publication of the Department of Defense explains operations principles and new terms with references to the Second World War, Korea, Vietnam, or the Golf War of 1991. The reason for this may be that such references make understanding complex connections easier. The evolution of turbine propulsion, precision weapons, stealth, electronics and data link as well as improved passive protection has taken almost 70 years, but it brought forth a relatively high survivability of the aeroplane which had never been achieved before in history. Whether laser weapons used for air defence will change this lead will be seen in future, as only a persistent offensive is decisive in an aerial war. Whoever is in the defensive will loose. UAVs are another technological revolution, offering options both upwards (the Global Hawk has the same dimensions as a smallish airliner) and downwards (Micro-UAVs). They have extended the potentials of land, air and sea forces. UAVs have presented possibilities for fighting against targets on the ground, without endangering a crew. They are strategic weapons for (often masked) fighting against special “leadership” targets, and tactical weapons for fighting against hostile insurgents, troops, weapons and logistics. The USA will also have to take into account that a hostile power will fight their communication, navigation (GPS) and reconnaissance satellites, and thus UAVs are alternatives within the scope of the Passive Relay- and Multi-Platform Technology-Program on the basis of MQ-9 und RQ-4/MQ-4.