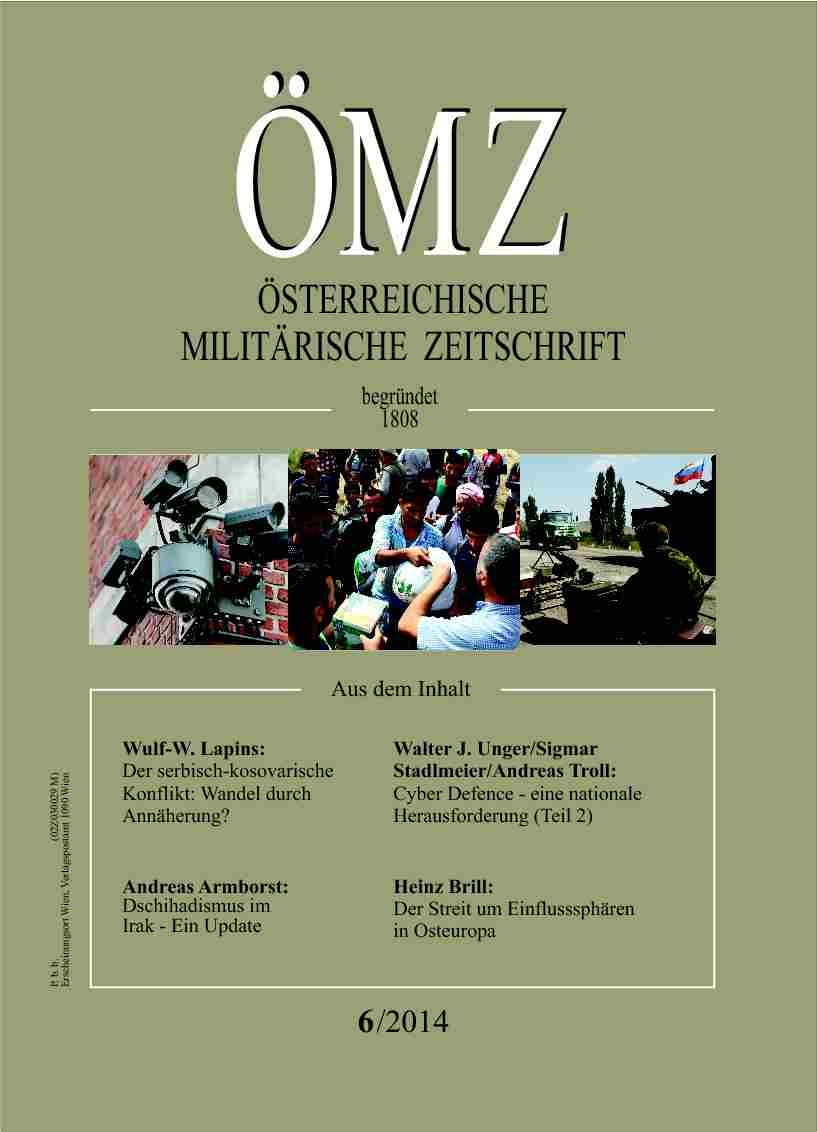 The aim of this study is to make a contribution on the relationships of normalisation between Serbia and Kosovo-Albania, without restrictions on legal, moral or purely real-political considerations which would certainly possible in this matter. The author is aware of the fact that the status of cooperation has not been developed and consolidated so far for presenting a perfected critical assessment. For this reason, this political analysis only goes over the permanent political regulating process on the given empirical basis. Only if the historical background and context of how the world was yesterday, one will be able to understand the world as it is today. In a systematic cross-section this article deals with different areas of investigation which are relevant for the following key problem: Has the alignment of points of view and positions favoured the resolution of the conflict between Serbia and Kosovo and thus preluded a “change by convergence”, a political paradigm shift? This question is highly relevant for establishing a culture of stability on the West Balkans and also for the European order of security and peace. The political approach of the German East and détente policy serves Brussels’s diplomacy - mediator between Serbia and Kosovo - as a historical blueprint for settling the ethno-territorial conflict between Serbia and Kosovo. In the same way the Cold War was finally ended by conflict mitigation. In 2010 already - two years before the negotiations between Serbian and Kosovarian top-level politicians started - the German-German model as a reference example for a future Serbian-Kosovarian co-existence was discussed in scientific and diplomatic cycles. Kosovo not only strives for entering the EU, but also for a membership in NATO. Serbia, on the other hand, does not want to pursue its joining the alliance yet, for domestic political reasons and foreign political consideration for Russia. Whatever the decisions in Pristina, Belgrade and Brussels will be in this matter, they will have a security-political dimension for Europe as well as for its relationship with Russia. Here, the European statesmanship will have to generate that long-term formation of common security in the West Balkans, in the framework of an aligning, collective and short-paced policy. As early as in the course of the process of approaching the EU already, and not only in its reference framework, the political achievement of Serbia and Kosovo will be to develop a common understanding for their roles in correlation with each other.

In the current context, the competence facts „maintenance of public peace, order and security” as well as “military affairs” are concerned in the first place. The former, according to the constitution, is the responsibility of the Home Office, the latter lies with the Ministry of Defence and Sports. The Austrian Armed Forces also have to accomplish tasks abroad and tasks in other areas of authority, such as security police assistance and emergency procedures. The national service act primarily regulates the internal organisation of the Armed Forces, and in paragraph 2 it substantiates the determined purposes of military national defence, of security police assistance, of emergency procedures, and of missions abroad on the constitutional level. In this context it has to be made clear that the core task “military national defence” also includes general operations preparation, immediate operations preparation, and debriefing measures after an operation. Here, general operations preparation means securing permanent operational readiness by providing all operational conditions, particularly those of personnel and material nature. The merely demonstrative enumeration (“particularly”) does not exclude further precautions (such as those of an intangible nature), thus also permitting mission oriented precautions concerning cyber security. Immediate operations preparation, on the other hand, means reinforcing and increasing the operational readiness of the Armed Forces, provided that - due to permanent observation of the military and security-political situation - risks endangering international independence, inviolableness or unity of the federal territory can be anticipated. In this rule, “permanent observation” is implied, for it provides clues for pertinent threats. In this context one has also to observe the development of the situation in cyber space in order to detect clues for massive threats directed at national independence (= freedom of action without political pressure from outside). The former inspector general of the Bundeswehr, General (ret.) Klaus Naumann, thinks that neutral states of the 21st century can overcome the mostly global dangers “only in alliances and international organisations”. In the 21st century, defence not only comprises the three conventional dimensions land, air, and sea, but also includes space and cyber space. Defence is not a task of armed forces only any longer, but “requires the network of all security forces, inter-ministerial command and control comprising the entirety of the state, acting rapidly, covering protection in humanitarian emergencies and natural disasters, fighting against organised crime, defence and protection against the impacts of NBC-weapons, air raids and cyber attacks. Naumann’s statements confirm Austria’s way, and should be an incentive to finish the concept development swiftly, to forward the development and the upgrading of projected instruments for the protection of cyber space. Within the national network of all cyber security and defence forces, embedded in the European Union, based on partnership with NATO, sufficient and resilient protection of cyber space could be achieved.

This article points out how Jihadism in Iraq has recovered from its nearly completely shattering in 2010, and how it has developed into a serious political and military actor in Iraq and Syria since then, threatening the world in the summer of 2014 again. The text summarizes contributions of think tanks and journalists concerning this matter, thus giving the reader a brief overview on the decisive turning points in the short history of Jihadism in Iraq. The perhaps most momentous turn in this history is the spinoff of the Islamic State from the global Al Qaida movement. This manoeuvre has the potential of discerping global Jihadism, which, on the other hand, might lead to a realignment of the strategy and the alliances of its regional offsets in the Caucasus (Caucasian Emirate), Maghreb (AQIM, Ansar Dine), on the Sinai Peninsula, in Sub-Sahara Africa (al-Shabab, Boko Haram), and on the Arabian Peninsula (AQAP). The outbreak of the Syrian civil war in March 2011 has given the development of Jihadism in Iraq new momentum. Until today Iraq’s Al Qaida (AQI) has changed the name of its organisation six times. In temporal order its name was at-Tawhid wa‘l-Jihad, Al Qaida in Mesopotamia, Mudschahedeen Shura Council (MSC), Islamic State of Iraq (ISI), Islamic State of Iraq and al-Sham (ISIS), and, at the moment, The Islamic State (IS). As a matter of fact, in the 11 years of the development of AQI, important organisational changeovers, disagreements, or new alliances have led to changes of name. Due to the amalgamation with the Syrian Jabaa’t al-nusra on 8th April 2013 AQI has enhanced its influence in Syria considerably. In reality, ISI and Jabaa’t al-nusra are deeply disunited already. Like in the Iraq civil war, the trigger of the internal conflict is the uncompromising attitude of ISI and the divergent points of view of its allies - never mind how deeply rooted these may be in the local population - stigmatized as apostasy (turning away from Islamic faith), suppressed, and too much fought against. With the discord between Jabaa’t al-Nusra and ISI(S) looms an organisational separation between the central command of the Afghan-Pakistan Al Qaida (AQ) and ISI, which raises the question which organisation actually represents transnational Jihadism in the region today. Both Ayman az-Zawahiri and Abu Bakr al-Baghdadi claim command and control for the Jihad which acts all over the world. With the declaration of the caliphate on 30th June 2014 al-Baghdadi substantiates the claim that the “Islamic State” under his command is the territorial basis for the expansion of global Jihad. With this step he establishes ideological facts which cannot be made undone, and which poses the dilemma to all Jihadists worldwide to commit either to AQ or to IS. Although there are permanent initiatives by Jihadist jurists to lead the IS back into the organisational and command structure of AQ again, at the moment it seems that Sunni feudalism has been enlarged by another influential movement.

In the assessment of international situations, geopolitical thinking and acting are permanently increasing. This tendency is especially prevailing in world and super powers, but in numerous regional powers as well. At the moment, nearly in every international discussion the geopolitical relevance of both Ukraine and Turkey are emphasized. Because of the mutated space-powers-constellation, for both nations geopolitics has become a central criterion in their new assessment of the situation: Turkey, due to its position on the interface of geopolitical areas, as a rising power striving for becoming the geopolitical pivot in Eurasia, and Ukraine, due to its national system conversion and its consequences for the rearrangement of the post-Soviet area, striving for re-defining its international position. Whereas Turkey’s subject function is increasingly finding acceptance in international politics, Ukraine tries to avoid the Russian sphere of influence, threatened by the break-up of the state. So far the future of the post-Soviet area has not been discussed sufficiently by the EU, NATO and Russia, and the Russian suggestions have not been reviewed, neither. For this reason, the analysis at hand is supposed to expose the new national and international dynamics of politics; further on answer the question which chances and threats resulting from the rapid shifts of power and fields of conflict indirectly and directly affect both foreign and security policy of Ukraine, and last, but not least, the central question which geopolitical options will be open for Ukraine if it develops from an object to a subject of international politics. Here, some geopolitical factors will have to be taken into account. In the present security political situation of Europe, “Inter-Europe” - and here especially Ukraine - is in the danger of becoming a (permanent” conflict zone, where a confrontation of EU/NATO with the Russian federation is possible. This scenario was described by Winfried Schneider-Deters already years ago. He, however, also saw the possibility of a balance of interest for both sides, “in which Ukraine’s own decision will be operative.” In the course of his induction in February 2010, the Ukrainian president Viktor Janukowitsch delivered a very respected keynote address: Ukraine is supposed to become the „bridge“ between East and West; - cooperation with NATO without membership; - association treaty with the EU, but at the same time approach to Moscow’s “Eurasian Economic Area”; - creating a Ukrainian-European-Russian consortium for monitoring and modernizing the Ukrainian gas pipelines; - and last but not least, Ukraine was to become a “European and unconfederated state” under his leadership, a nation fostering equal and ambilaterally profitable relationships with the Russian Federation, the EU, the USA, and other states. With these core issues Janukowitsch tried to pursue „multivectoral“ international politics in the framework of strategic balance.