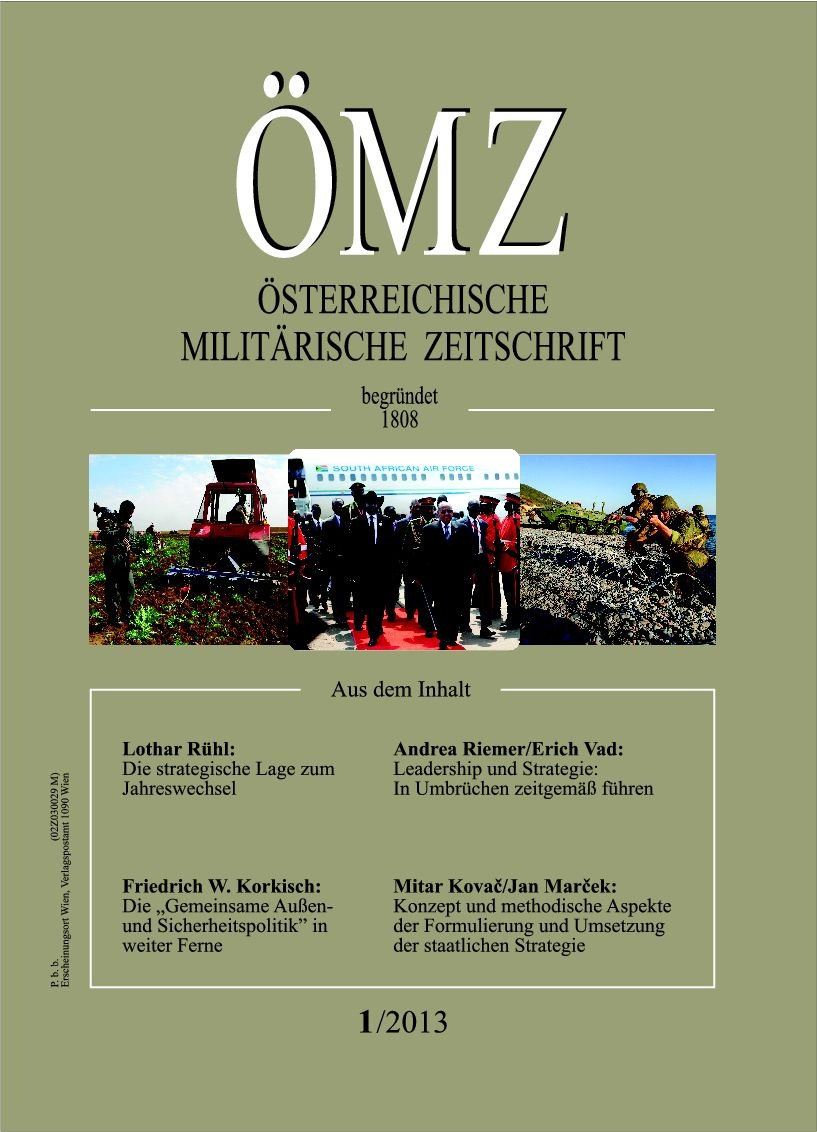 The turn of the year from 2012 to 2013 shows an unclear view of a complicated global strategic situation of international politics. In the course of the past ten years this has been also more or less the case since the terrorist attack on America in September 2001. In each of these years, however, the constant factors dominated over the variables despite the current events, until the spring of 2011, when a storm of revolt swept over vast parts of the Arabian Middle East from North Africa to the Persian Gulf, shaking up the foundations of the post-war orders of both 1919 and 1945/48, and rejecting the strategic coordinate system of the geopolitics of the Near and Middle East - in the widest geographic sense - for all powers both external and regional. This also included the temporary result of the American-British Gulf War of 2003 against Saddam Hussein’s Iraq. In the North the bolt between the Kurds of Syria, Turkey and Iran has opened along the entire geographic breadth, offering the political vision of a “Free Kurdistan”. Thus, the Kurd problem of territorial integrity of the nations involved, and of the borders of 1919/21, is re-emerging. In autumn, the Iraq government of the Shiite Prime Minister Nuri Kamal al-Maliki reinforced the border controls with Syria, because of the concern about the development of Sunnite terrorist groups and about a possible spilling over of the fighting of the Syrian rebellion against the Assad regime into the North of Iraq. At the same time Turkey increased its air raids against Kurdish battle groups in Northern Iraq, thus demonstrating the ineffectiveness of Iraq’s air defence, which is a dangerous opening especially concerning Israel’s air force crossing Iraq’s airspace into Iran. Although Iran is threatened by loosing both a dependent ally and its strategic depth with an offshore front in Lebanon and on the Golan Heights against Israel with the regime of the Alawite Assad, it will be able to use the threat against Iraq posed by the civil war in Syria, because it makes the Shiites in Iraq increasingly dependent from the support by Iran, and because it makes it possible for Iraq to get friendly with Iran. How the civil war in Syria will end, and which consequences it will have for the Near East, remains unknown. The crisis region “Extended Middle East” concerns the economic and strategic interests of the USA and China, who actively compete for both the rich mineral resources in Africa and the oil of the Gulf Region - a rivalry in and around the Gulf Region, in which most of all China, India and Europe are involved. Russia, which has lost its African and Middle Eastern sphere of influence since the end of the Soviet power, and which tries to regain it at least partially with all available means, is also involved in this competition and the political rivalries connected with it. A new „Great Game“ for energy resources in Central Asia is under way, like in the end of the 19th century, with new players besides Russia: China and the USA, but also India, Turkey, and - instead of Great Britain alone - Europe with its bigger nations, without unity and common policy, thus also without a European strategy. In addition to that, the financial crisis in the West maybe will become a catalyst for the arising global crisis. The economic and social deficits of the USA and the EU will have general negative effects on the legal capacity of the West and NATO, thus accumulating and multiplying the crisis factors.

Today strategy and leadership are extremely challenged, because the social-political situation in general and the security-political world in particular have become less and less predictable. The confrontation with increasingly global networking including close interdependencies has become day-to-day political reality. As has been shown by the economic and financial crisis since 2008 and the reactor disaster of Fukushima in 2011, normality tends to become exception, whereas a state of emergency becomes a rule. At the same time the political and governmental space of Western industrial societies develops in a rather distinguished way, individualistically, with a tendency towards political defragmentation. These factors of influence make operational and situational leadership management, as well as surviving every single day, dominate so strongly that strategic emphases and objects get out of focus. In addition to that, instead of strategic thinking and action combined with leadership, really bureaucratic tactics of avoiding mistakes and vain attempts at controlling everything - and in the end nothing - become apparent. The traditional hierarchical total structuring of organisations leads to the tendency to push responsibility upwards, according to the motto “reporting makes free”. This prevents the look beyond the boundaries of the own sector and department, leading to glossing over the facts and to administering creative and strategically designed solutions to death. Concerning further training, this traditional understanding of leadership only leads to imparting of expertise and to some kind of knowledge which - due to the permanent change of today’s social, political and economic processes - will always be out-of-date when it is to be applied. Today more than ever, however, flexible, rapidly changeable and adaptable organisational structures are necessary in order to be able to react appropriately. Always proving to be available around the clock, as well as the ostentatively demonstrated state of being overworked, are often signs that competent employees are not enough incorporated into the tasks to be fulfilled. Here can also be seen that there is a lack of leading with assignments, of flat hierarchies, and of acknowledgement of good leaders by the administration. Really modern strategists and leaders, on the other hand, bet on participation, on experience of their employees going beyond sectors and departments, on networking beyond the own department and economic sector. They assemble leaders and employees with manifold perspectives at the round table in order to be able to analyse complex situations rapidly and comprehensively, and they encourage and motivate them to think out of the box. Modern strategists and leaders network. They establish a leadership culture which is characterized by confidence, mutual esteem and participation. Successful strategists and leaders are capable of conveying purpose and orientation, and they are living examples of them. Every day they put into practice what they demand; they activate and stimulate the capabilities of their employees, and they know that real strategy and real leadership can only begin when all the talking ends and a conclusive and at the same time harmonious entirety comes into being.

Whereas in 2002 everybody was euphoric as far as ESVP, GSVP and GASP were concerned, in 2005 already it became obvious that there were problems concerning their realization. Although some authors believed that this was the consequence of the Iraq war, of the orientation of some EU nations towards the USA, or of leadership deficiencies in Europe’s politics, but it was clear that the budget situation of the EU only allowed to keep alive NATO and to draw back to small national armed forces. Some nations even abandoned tanks, artillery, fighter aircraft, engineers or battleships and did not even have contingents ready for pooling projects, except perhaps the European Airlift Centre with its transport planes. Therefore time and again there are substitute cooperations, such as between France and Great Britain, France, Belgium and Germany, between the Scandinavian states, and the Visegrad states. Time and again “EU division summits” are planned, but they end without any results, because there are too strong opposites of interests and no funds. Most EU nations keep silent about the events in Syria, which is remarkable. Since the Vietnam War it has been known that nation-building programs, no matter under which name, are no use. The term Comprehensive Approach will remain an empty phrase as well, if the population of a country, such as Afghanistan, does not share the changes. For this reason the US Government has declared once more that nation-building programs will only be financed where an obvious success is possible which can be controlled as well. It was clear that the USA under their president Barack Obama, when turning to East Asia, would upvalue NATO in Europe, and that America would try to get new allies. Thus a geopolitically clear course has been traced out with Russia. As far as Iran is concerned, one will bet on negotiations, because the reduction of debts has top priority, and because the China Containment can be signed due to the friendly relationships with Vietnam and the new relationships with Laos and Burma. In addition to that, China has taken a tougher line against North Korea, whose government is preparing a change of course at the very moment. Since the Iraq War an expansion of “Partnership of Peace” to “Global Partnership” has been made a subject of discussion, and the first steps have been taken by the “Coalitions of the Willing“ long since. In Washington the circle of reliable and friendly PfP-nations has been extended to Finland, Austria, Sweden and Switzerland, as a result of the fact that the European Non-NATO-Members have turned to closer cooperation with the USA and NATO. Another reason is the rediscovery of many political, historical and cultural common interests and personal relationships. And so suddenly Austria finds itself in the close circle of PfP-nations which the USA and NATO will increasingly rely upon.

This essay represents an attempt to define the concept of a national strategy on the basis of a comparative analysis of current knowledge, and to define contents and extent of this concept and its importance for the survival and development of a nation within the present strategic context. In addition to that, the relationship of this concept with other concepts, which are closely connected with this, is investigated, and a look into the most relevant methodical dimensions, apparent when drawing up and realizing the national strategy as a programmatic document, is made. The concept of a national strategy is relatively new and not only concerns security and defence, but also other duties of the government. In order to guarantee the clearness of the concept, the continuous changes of contents and extent according to the opposite views of different authors and nations, where the concept meets varying terms, such as national strategy, full-scale strategy, social development strategy, major strategy, general strategy, or complete strategy, are demonstrated. The fact that the factors concerning the basic national interests have changed in a more severely and relevant way more than ever, has influenced the most important national and governmental values as well. In the light of this, in many states the national strategy is above the acting or future administration, and consequently above politics, because the relevant national interests have been laid down in consensus by all relevant political players. Without a governmental strategy representing a unique national vision, which is based upon values, interests and goals, no relatively stable and objective national security strategy, or any other separate strategy for the main functions of the state, can be defined in a consistent way. The theoretical, epistemological and methodical dimensions of a national strategy are decisive for its creation and development. The name of the document as well as its form are not as important as the fact that it exists, and that all relevant society players have been involved in its preparation. This document has to put forward the most important strategic guidelines for the interests and the vision of the development of society, always taking into account the factors of the strategic environment determining it. With a national strategy and clearly presented strategic commitments concerning all relevant issues of society, including values, interests, goals and ways how to realize it, the state presents itself as a responsible-minded actor, who will act with all its authority and capabilities for the benefit of its citizens. Thus the state becomes a service provider and a trouble shooter in all areas of living together.