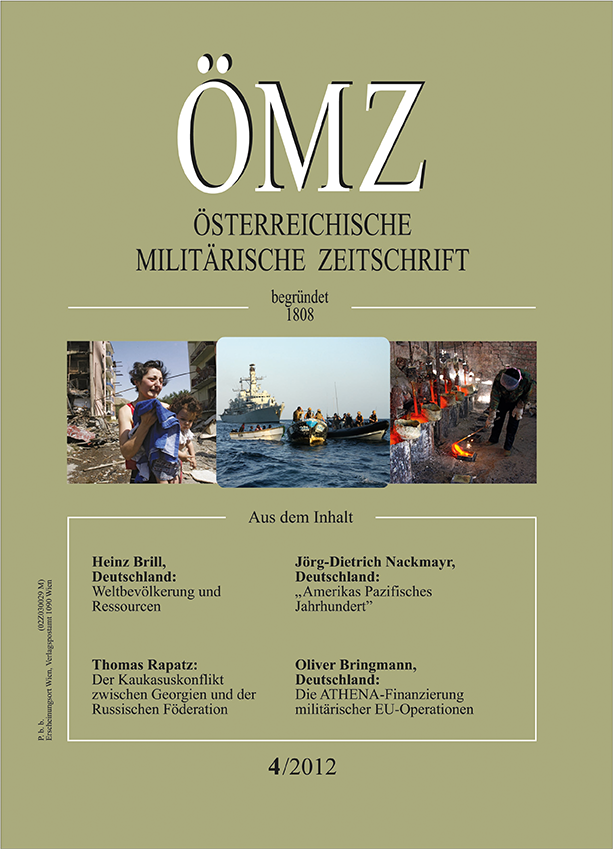 Since the end of 2011 seven billions of people have been living on earth, at least in terms of figures. The earth’s resources, however, are limited despite raw materials growing again and renewable forms of energy. Whether food, water or energy - we are on the brink of supply shortages and scarcity. There is no prospect of an end to growth in population. By 2050 about nine billions of people will be living on earth. According to UN predictions, this “population explosion” will increasingly change the world, because it does not take place in Europe, but in Asia, Africa and Ibero-America. Undoubtedly the intensity of distribution conflicts will increase, whereas at the same time resources, water, energy and soil determine the present discussions and represent the great challenges of the future. Concerning security policy, within the scenarios for stabilizing unstable regions experts (political advisers and think-tanks) are increasingly confronted with geo-economic and geo-ecological issues.

In numerous „trend analyses“ one can already detect which new rooms for manoeuvre, options and perspectives present themselves to the European and international political protagonists on account of the changed global general set-up in the beginning of the 21st century. For this reason, this paper mostly aims at working out relevant complexes of problems and main questions derived:

1. Is there an interrelation between demographic evolution and resources requirements?

2. Are arrangements possible between fixed factors (resources) and variable factors (demographic evolution) in order to guarantee a peaceful future of international politics?

3. Which conflict potentials and scenarios can be seen to emerge?

4. Which conflict solutions are being discussed?

With this outline this analysis is supposed to offer guidance in an age of change.

Survey and perspectives for security politics

Together with the rapid increase of world population, the rise of new powers, and their geo-political consequences, a worldwide structural change has become afoot. The supply of the world community with resources has been added to the great challenges of both new and old protagonists. In a world with seven billions of inhabitants many resources (renewable or growing again) have become scarce already today, particularly water, soils, energy, and food. In the short and middle term, they represent the great questions and tasks of the future, and they must not remain unanswered or unsolved, because the conflicts caused by resources will be the central topics of national and international security politics in the 21st century.

Actually the term Great Game is old, but it has emerged again in specialized literature in order to put a new light on the events in the “Deep South of Central Asia”. 100 years ago the Great Game stood for the Russian-British struggle for dominance over Central Asia during the fight for India. Today, however, a much more complex reality is brought down to a denominator with it. Meanwhile an own debate has started on the question whether the term Great Game describes the struggles and conflicts of the 21st century in the Hindukush appropriately or not. Nevertheless, one must not forget that China and India are in the geographic environment of Central Asia, the two countries with the most inhabitants, and they have awoken from their political-economic hibernation. Like the petals of a flower, the Central-Asian neighbours Turkmenistan, Uzbekistan and Tajikistan in the north, Pakistan in the south and east, and Iran in the west, are grouped around Afghanistan, representing further focuses of international relationships. Furthermore, there are the USA and Russia with their own forces and interests present in that area, each considering it their sphere of influence. The European countries are present as well, but at the moment they act as objects rather than as subjects of their own strategic considerations. All this goes hand in hand with an economic dynamic force in the region, which has become a factor of the 21st century, not only due to its raw materials deposits. Old political knowledge, excellent cultural depth, and both business and scientific achievements represent a solid foundation. Additionally, there is the strategically relevant position as a transit region for the exchange of raw materials and goods between East and West as well as North and South on the Eurasian continent. Thus, one can find the term “Asian Century” already in literature more and more often. On the scale of the world Asia is returning to the standing it had held already once, from the Ancient World up to Renaissance, and because of its position Afghanistan plays a “central” part. Today it looks like Afghanistan might be able to live up to its reputation as the “cemetery of the superpowers” in the 21st century as well. Maybe it will be important to remain present in this region. Today we cannot foresee which powers will fail and which will stay, which alliances will arise or vanish, and surprises are included. Nevertheless the gain in knowledge caused by the facts at hand in 2014 will help to examine the concepts of realistic international relationships critically, first and foremost the Theses of the Great Game. If the USA withdraw from Afghanistan and leave a vacuum in Iraq, this will affect the system of international relationships as well as the establishing of theories and the schools of thought. Thus, the real conduct of the USA towards Afghanistan will become the acid test for the quality of geopolitical theories altogether, and for the USA as a world power.

Summary
Russia’s military intervention in South-Ossetia as a reaction to the Georgian attack on Zchinvali, and finally the unilateral recognition of the independence of Abkhazia and South-Ossetia by Russia, the two regions apostate from Georgia, have not only hardened the Russian relationships to the west, but on the other hand have shown that the Kremlin is prepared and able to protect Russian citizens and interests existing in the immediate neighbourhood. Here one can observe that Russia was certainly not impressed by Western measures of dialogue and sanction at all. The long-term consequences of the Georgian attack on South-Ossetia, ending with military defeat caused by Russian measures of intervention, were not only negative effects on Georgian attempts of re-integration of these unilaterally recognized self-governing regions, but also a serious strain on the relationship USA/NATO/EU with Russia. There were already rumours of a return to the Cold War, and in addition to that, the Georgian domestic “Frozen Conflict” had become international again. The events of the conflict with Russia on the one hand led to the loss of the apostate regions South-Ossetia and Abkhazia, and on the other hand left grave marks in the relationships within the community of states. The Russian reaction and the deployment of Russian forces in the Georgian central region led to a massive disgruntlement among the Western allies, and additionally to a distorted relationship between Russia and the USA as well, which became normal not until 2011. Afterwards, Russian foreign and security affairs stressed the protection of the East-European „Cordon Sanitaire“ and the containment of both European and NATO influence in South-Caucasus and the Black Sea region as matters of top priority. „Lessons learned“ by Russia led to a reform of the armed forces which has taken place since 2009, and which will presumably be carried on vehemently if Vladimir Putin is elected new Russian president, although Russian plannings concerning the establishment of mobile task forces on the basis of paratroops and massive investments in new arms - tanks, helicopters, fighters and new missile technology - are certainly not new. The desired financial budget framework for all this will be immense. In the end, however, the political development in the countries of the Black Sea region and the Caucasus are not only influenced by Russian foreign and security affairs, but also by NATO issues of extension and by the European neighbourhood policy concerning this region. Since then the perceptible Georgian foreign and security policy has been coined by the desire to approach NATO and EU and to make independence from Russia irreversible. So it remains to be seen whether the major sporting event, the Olympic Winter Games of 2014 in Sotschi in Russia, will result in further disturbances in the region.
Sommaire

The routine check-up of the ATHENA-financing mechanism in the second half-year of 2011, as the fourth edition after 2005, 2006 and 2008, represented a classic example of diplomatic art of negotiation in the EU committees, and it can be easily considered a blueprint for the principal seminar „international negotiations“. After twenty-two rounds of negotiations in the RELEX (exterior relations) council working group, five dealings on the ambassador level in the committee of permanent representatives, and two dealings among the ministers, the review of 2011 was a unique record, at least as far as the number of meetings is concerned. These efforts, however, face rather poor results. Apart from a series of mainly editorial adaptations, the 26 ATHENA members of the EU (i.e. all 27 except Denmark) finally were able to make a compromise which concerned the EU Battle Groups in particular. A separate declaration of the council, which is definitely not a constituent part of the new ATHENA-council decision, prescribed that the costs of transport of the EU Battle Group are to be financed mutually via ATHENA. This declaration of the council, which has basically existed as a previous version since 2006, is limited with 31st December 2013, and it contains several conditions. Only transport into the area of operation is to be financed mutually (not the way back), extended to all means of transportation (so far only transportation by air), but based only on a sophisticated system of incentives granting those nations higher rates of reimbursement who make national efforts to acquire or operate strategic transportation capabilities. The development of a calculation model for a final fixing of “flat rates” has been assigned in principle, and the result is to be submitted to the council for definitive approval by mid-2012. The second relevant result concerns outline agreements - especially contracts with civilian providers of certain services. In a newly-added Article 11 Paragraph 4 ATHENA is granted the legitimate possibility to conclude outline agreements with non-governmental bodies even beyond a defined operation. In the course of the consultations, however, it was not possible to combine this regulation with Annex I, which would have made mutual financing even beyond the active phase of (current) operations possible. Thus, a mutual financing according to Article 15 Paragraph 7 is impossible, because this would require public costs during the active phase of an operation. To what extent a regulation which cannot be backed by budgetary means will be for any practical benefit remains to be seen. Altogether the EU will be well-advised to watch NATO closely. From now on the question will move into centre stage which capabilities the EU will be able to summon on its own, without the possibility to fall back on a NATO which might become more and more undermined. In that case, at the latest, it will become plain that so far the military Joint Security and Defence Policy has been only lip service of European politicians. So Europe actually is only at the very beginning of a common military-political development.
Sommaire