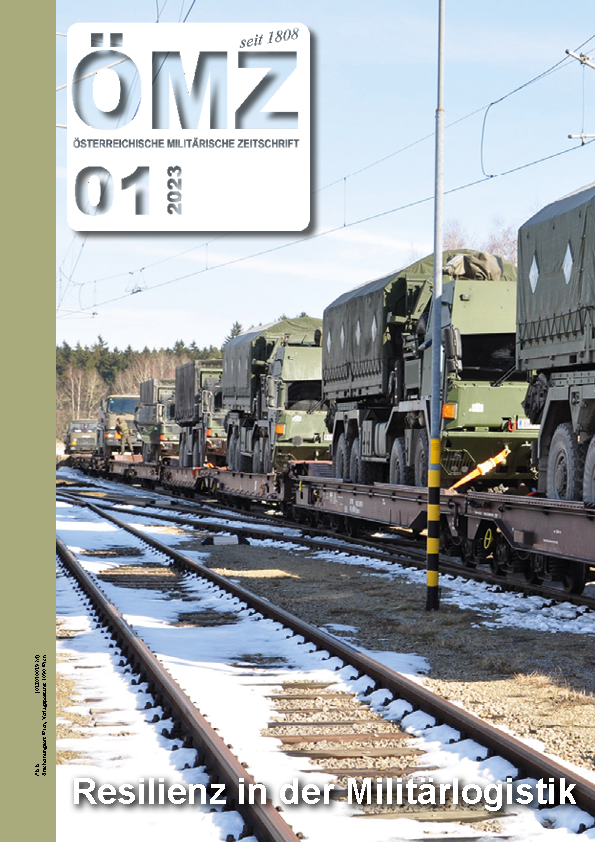 During the period under review, strategic challenges have developed in a complex and dynamic way that had not come close to occurring in the last three decades, despite many crises. Even if one includes the events of the years 1989 to 1991, or the period of instability between the Warsaw Pact and NATO from 1980 to 1983 with the stationing of the Russian SS-20 missiles and the NATO response with a double decision, the stationing of the Pershing-2 and new cruise missiles in Europe, a problem such as has developed since August 2021 has not yet arisen.

On February 25, one day after the start of Russia's military "special operation" with an attack from three directions on the centers of Ukraine, German Chancellor Olaf Scholz described the attack as "surprising" and a "turning point". For many politicians and strategic experts, the unimaginable had happened: there was another violent, conventional attack in Europe on a sovereign, democratic state. It was the end of an illusion, the end of clinging to the ideal of the "peace dividend" and Fukuyama's vision of the "end of history". But the strategic developments were determined by neither irrationality nor unpredictability.

February 24, 2022 was not a turning point, but only a step in a long-term course of political-strategic developments under Putin, which were treated in a "desirable" way in the West, and the sequences of the strategic process were not properly assessed or pushed out of sight. Therefore, some decisions and measures were taken in the way of wishful thinking. One did not want to take note of Putin's strategically consistent approach. But the goals of the rulers of Russia and China were and are creating a new world order, which are not consistent in detail. In this way, the events triggered by 24 February 2022, in conjunction with other current factors such as the pandemic, climate protection or supply chain problems, acquired a global dimension and complexity. For a Europe that is again inconsistent and indecisive, this entails the danger of slipping into a subordinate role determined by dependencies and of being pushed into the role of an "observer" of processes without the possibility of dynamic participation.

The actual Second turning point after the First in 1945 resulted in the years 1989 to 1991 with the end of the "Cold War" and the collapse of the communist political, economic and social systems of the USSR and its predecessor. This took place without violent conflicts. But over the next three decades, there was a series of violent conflicts over the breakup of Yugoslavia or the Middle East, as well as the 1995 and 1999 air operations against targets in the Balkans. All this should have been taken as a warning. To that, the CIA issued a concrete warning to NATO countries weeks before February 24.

The expressed surprise about Putin's actions was surprising, though. In the current situation, in the case of a rational Putin, despite the threats, the use of strategic A-weapons would be completely ruled out and tactical ones to a large extent. But there remains an irrational factor that, in the event of difficult developments, does not completely rule out a tactical-operational operation for Putin. One would be well advised in Europe to prepare for requirements in such a case.

Within the framework of the UN, OSCE, EU, open and "silent" contacts can be maintained. In addition, their sub-organizations such as UNHCR or WHO, together with well-organized and cooperative NGOs, provide globally invaluable humanitarian services in a broad spectrum. These organizations reflect the hope for a future that is once again peaceful and respectful of human rights.

In the course of the ever-increasing threat posed by the military aggression of the Russian army in Ukraine, the existing security and defence policy options in the Baltic States, Finland and Sweden, as well as in Poland, were subjected to a closer examination. The main focus was on the mutual comparison of the efficiency of NATO membership with the obligation to provide assistance within the EU, as well as on the consequences of the possibly associated abandonment of permanent neutrality or non-alignment for the EU member states affected by it.

In this context, the prerequisites for collective self-defence under Article 5 of the NATO Treaty proved to be more or less known, while the foundations of the collective assistance obligation in the EU - on the basis of Article 42(7) TEU - were by no means clearly established, nor were the associated neutrality and political problems. Therefore, the content and scope of the "assistance obligation" within the meaning of Article 42(7) TEU will be briefly described below. In doing so, the individual elements of the duty to provide assistance under Article 42(7) TEU are first examined - deliberately not in the form of a systematic presentation - and subsequently related to each other. Only then can general statements be made about the nature and scope of the duty to provide assistance, which are often quite controversial in the relevant literature. For this reason, the following procedure is not in the form of a "question-and-answer" scheme, but the reader is encouraged to configure the answers to his questions independently on the basis of the following elements of the assistance clause.

In the future, the EU will have to devote more attention to its geopolitical and geostrategic role in Europe in order to be able to continue and sustain this process accordingly. The events in Ukraine have given these activities, which have only just begun, a new dynamic. However, if one reviews the efforts made so far to achieve uniform security and defence policy standards in the EU, it becomes clear that the now necessary standardization can probably only be carried out with a corresponding delay. Hopefully the course of events allows for this, as the old Roman wisdom still applies: "Si vis pacem, para bellum"!

In our perception, is Africa the continent with the strongest population growth (currently around 1.2 billion people live there)? Probably less, but all the more as a continent - torn between corruption, civil wars and the development of democracy - with an almost immeasurable deposit of raw materials, whether oil, cobalt, diamonds or the like. Furthermore, a continent of dreams, of freedom, of vastness; democratic spirit of optimism versus persistence in traditional ways of life; nature conservation versus economic development; directed towards either Europe or Asia. It is a continent that with a contrast between northern and southern deserts, savannah steppes and tropical rainforests and altogether extremely diverse vegetation zones, but with regard to hydrogeographical aspects knows no natural boundaries. For example, it should only be pointed out here that the great rivers Nile, Niger, Congo and Zambezi, all originating in the African highlands, are often not suitable for shipping and thus cannot be used as trade routes, as their courses often lead over waterfalls or cataracts.

While during the Cold War African leaders were more or less forced to turn either to the West under the leadership of the USA or to the East under Soviet rule - with all the advantages and risks - the situation changed fundamentally with the end of the East-West conflict in 1990/91. Today, African politicians have much more choice or the opportunity to decide what they want to do with their countries and with whom they want to work together.

This is where the emerging world power China comes into action. No country has invested more in Africa's infrastructure in the last 15 to 20 years than the People's Republic. China's President Xi Jinping recently stressed that nowhere is there more development potential than in Africa. A decisive instrument is the granting of loans on often supposedly favorable terms. Of course - and this must be said very clearly - China is not acting altruistically, but rather the leadership of the Chinese Communist Party (CCP) is interested in massive influence in numerous African states in order to be able to exploit their resources and strategic locations for its own interests. Where China defines its positions and claims - however - its protagonists are also on the ground in the appropriately adapted form, be it civilian, economic or - in extreme cases - military in nature. In any case, China's involvement is highly attractive to many African leaders, as Beijing neither imposes any conditions on compliance with human rights nor demands economic reforms.

The fact that China's foreign and geo politics is still guided by the motto of the then Minister of Defense and Mao confidant Lin Biao from 1967 - "Africa must contribute to surrounding and destroying the capitalist Europe and North America" - does not seem completely absurd according to the considerations presented.

The year 1683 marks a turning point in Austria's history like hardly any other. With the defeat of the Ottoman army in front of Vienna, the unstoppable push-back of the Turks from the northern Balkans and the contingented rise of Austria to become a major European power began. However, before the Battle of Vienna could go down in history as a victory of the Christian peoples of the West against the onslaught of the Prophet's hosts, the city proper and especially the surroundings of Vienna had to suffer from enormous sacrifices. According to the chronicles, around 30,000 inhabitants of Lower Austria (mostly from south of the River Danube) may have been slaughtered; about 40,000 people of both sexes, including many children, were taken away as prisoners (of whom only very few ever saw their homeland again) and about 5,000 villages had gone up in flames. The Turkish contemporary reporter Silihdar was impressed by the destruction: The "prey-hunting Tatars [...] destroyed the villages, towns, palanks and castles on the way, slaughtered the men, took the women and children into captivity, burned the dwellings and the seed fields completely, and devastated and ravaged the lands of the Giaurs to such an extent that even after a hundred years they may not have reached their former state of prosperity." It was therefore an enormous bleeding that the Lower Austrian region had to suffer at the beginning of this so-called "Great Turkish War", which had been started in 1683 and finally ended in 1699 with the Peace of Karlowitz. And, above all, there were enormous losses among the civilian population, whereas in comparison the military losses were limited. It therefore seems fundamentally interesting to trace the causes of why these enormous losses could come about in the first place, and whether any lessons for warfare in general can be drawn from them. Special attention should be paid to the village of Pfaffstätten in the district of Baden near Vienna, whose local chronicle describes the, as it says, "Turkish hype" in a detailed form. It should be noted that this insignificant village took an exceptional position in the course of the fighting, since it was attacked very early and almost completely destroyed. Its geographical location in the southern Vienna Basin, as well as the necessities of Ottoman warfare, were obviously decisive here. However, there is also the factor of security, which was misassessed in this case, although the population in the Vienna area had already made corresponding experiences with the Turkish invasions.

Against the background of the cruel events of that time, the author once again attempts to emphasize the current significance of defensiveness in the sense of cerebral national defense.